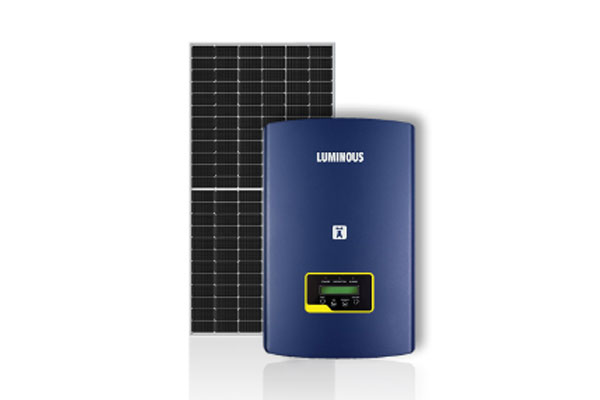 In this article, we will explicitly walk you through the operation and advantages of an on grid solar inverter. Nevertheless, let's first examine what an on-grid inverter is.
What Exactly are On Grid Solar Inverters, and What Do They Do?

Another name for an on-grid solar inverter is a converter. It transforms Direct Current into efficient AC electricity. That's not all, though. In a grid-tied solar system, it must also carry out a variety of other tasks. Let's examine each of them individually!

● Assuring Device Safety: An on-grid inverter has a safety system built in to guard the on-grid solar inverter system against electrical harm. The grid-tied inverter, for instance, immediately shuts off the system in the event of an electrical arc.

● Grid Support: The on-grid solar inverter enables bidirectional connectivity with the electricity grid. This implies that the inverter will pull energy as needed and feed any excess energy back into the grid.

● Tracking Power Production: A grid-tied solar inverter makes it simpler to monitor the output of electricity. As a result, each cycle's extra power production may be seen.

Moreover, it recognizes any grid interruptions and allows the solar system to enter a safe mode. If the grid fails, the inverter has the capability to cut off the power supply if necessary.

Solar inverters can be divided into two major groups. These consist of-

The grid is immediately connected to these solar inverters. They are the type of solar inverter that is most frequently used for both household and industrial applications. Typically, string inverters do not include a battery backup. However, an on-grid solar inverter system does not require a battery because the grid serves the same purpose.

Although they are more expensive than string inverters, micro-inverters are comparatively smaller in size. Typically, this group of inverters has a capacity range of 200–350 W. The micro-inverters, which are mounted separately on the back of each solar panel, are perfect for locations where the quantity of sunshine that each solar panel receives varies significantly.

An affordable and environmentally friendly solution for energy conversion is the solar on-grid inverter. It is, therefore, appropriate for both residential and industrial use. On-grid inverters come in a variety of varieties, each of which is ideal for a particular use. The finest uses for solar inverters include home settings, such as string inverters and micro-inverters. High-capacity central inverters, meanwhile, work best in industrial settings.

Furthermore, when someone refers to "hybrid solar inverters," they actually mean an inverter that is connected to both the power grid and a battery bank. The hybrid solar system is still connected to the grid, with the exception that it also includes a small battery bank for emergency use.

Cost of an On Grid Solar Inverter

An on-grid inverter's cost varies depending on its capacity, the manufacturer, the technology used to make it, and many other factors. On grid solar inverters, however, are typically more affordable because of their lengthy lifespan. Some manufacturers also provide 10 or 15-year guarantees. The better ones are more cost-effective in the long run and require less maintenance.

Even though there isn't a set cost, it isn't a good idea to choose a subpar product just because it is somewhat less expensive. Always talk through your alternatives with your installation firm before deciding what's best for you.

You are familiar with the varieties, advantages, and restrictions. Consequently, the grid inverter you get right now will be a wise choice. It's up to you whether or not to purchase a battery bank separately. However, our opinion is that if there aren't frequent power outages in your location, an on-grid inverter should be sufficient.

Additionally, make sure to invest in a reputable brand while purchasing. Luminous manufactures some of the highest-calibre solar inverters. These are the most minor, lightweight, efficient, and cost-effective power backup solutions available in the market.